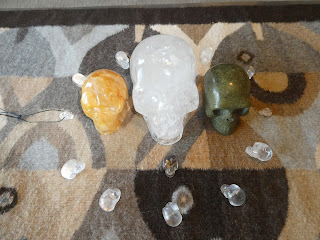 Last week, I posted about the crystal skull meditation I hosted at my house on Sunday afternoon.  As I write this, it is the next Saturday afternoon, and our group is meeting here tomorrow around 4 PM Mountain time.  The skull altar has been in place all week, and as you can see, I have added another quartz skull to the center of the arrangement.  This seems to be amplifying the whole set up, as I have had a hard time even approaching it because of the energy it is giving off.

I knew that the group journey/meditation last week was powerful, as the participants were pretty wigged out by the time we were finished.  I was even kind of spacey the next day, and had trouble recalling some of the details to write in the previous post.  Last night, I had a conversation with one of the people who was here.  She reported that on Monday morning when she woke up, she discovered that her phone was in bed with her, which was not how she usually went to bed.  Apparently, she had made several phone calls that way the night of the meditation, and then fell asleep.  She did not even realize that she had made those calls until several of the people that she spoke to reminded her of it later.  They thought that she was acting weird, and called back to check on her!

So, all of you are invited to tune into Sunday’s meditation.  Your focus should be on the crystal skull altar above, shortly after 4 PM Mountain time.  We generally chat a bit, and are done by about 5:15.  Even if you miss this post and want to tune in later, you can intend that you were with us at that time.  After all, we have aspects that are outside of time and space that can do that.  The altar will be dismantled probably some time on Monday, as I’d like to leave it in place overnight.

I do not know what the theme of the meditation will be, as I like to let that come to me spontaneously right before we meet.  Whatever it is, it will be amplified by the power that is still being generated by the altar.  If you participate and have any interesting experiences, feel free to leave a comment on this post.
Posted by Carla Fox at 3:22 PM