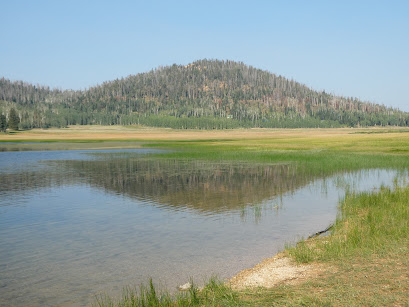 Yesterday, I got a long overdue massage.  Deep tissue at 90 minutes.  I am quite sore in some places today, so I decided to try a new hiking trail that is not too strenuous.  I have hiked Navajo Lake a few times before from the east end of the lake, so today, I drove 5 extra miles to get to the trailhead at the west end.   The lake sits at about 9,000’ elevation, and is about 25 feet deep, but with the very dry and hot weather we have been having, the water level is quite low.  This has exposed a lot of shore line that would ordinarily be under water.

Shortly after getting on the trail, I saw that it split.  One path going close to the water, and the other heading higher up and in the woods.  I chose the one close to the water to start with.  What a delight!  It was so nice to walk along the shore.  It was breezy, and I could hear the water splashing all along the way. 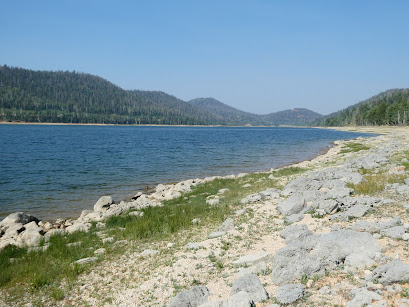 Of course, I am always looking for any new plant that I can identify, and sure enough, there was one there that I had not seen before.  It was a field mint. 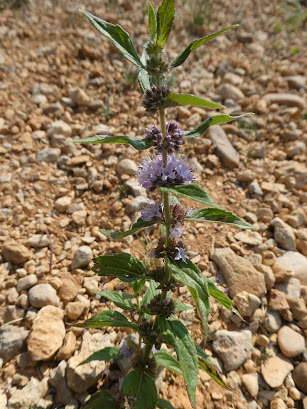 As I was standing up after taking a photo, a frog went hopping past my feet.  Wow!!!  I suppose that it is natural to see frogs near the water, but with our hot and dry climate this year, it was an unusual sight.

So this is where we get guidance that can be sent to us via the natural kingdom.  If you see an animal that is unusual in that place, or that you have never seen before, or is doing something out of the ordinary, it is giving you a sign.  Pay attention.  It is not a coincidence.  Your Higher Self knows that that critter will be at that place and time, and somehow engineers your presence to be there, too.  I would like to recommend 2 books by Ted Andrews.  Animal Speak, and Animal Wise.  Between these 2 books, just about every mammal, bird, reptile, insect, etc, are listed, so that you can find out what message is being imparted to you.

So frog was telling me that this is a time of new beginnings, new endeavors, and a time of transformation.  Cool!  I was also being advised to give new offers a second look, and be wary of engaging with other people or groups that are not of my best interest.  OK.  Message noted.

A short time later, I bushwhacked up the hill to get onto the trail that was in the woods, as it was shadier there.  Next thing I knew, an immature bald eagle flew overhead.  This is a very powerful totem.  The meaning was the illumination of spirit, healing, and creation, bringing in new creative forces and acceleration.  Very good.

Now this next incident was quite an interesting and even bizarre surprise, and something that had never ever happened to me before.  I was on a trail that a lot of bicyclists use.  Coming towards me was a guy on a bike.  And get this, no lie.  He was wearing a red t-shirt with “FOX” printed on the front in big black letters.   I was so taken a back, and he whizzed by so fast, that I didn’t stop him to have a conversation.  I am assuming that fox was not the animal, but the name.  A further emphasis that I was to really pay attention to the previous signs from frog and eagle.

I proceeded along the trail to a point where I could go back down the slope to the shore of the lake, and happened on this magical little island along the shore that had been exposed because of the low water level.  The mint plant that I had discovered earlier was here in profusion. 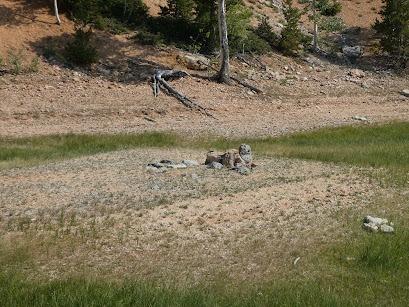 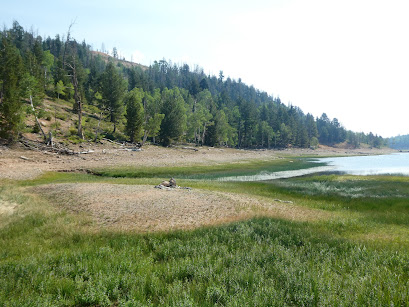 A bit further down the shore was a lovely rock outcropping where I sat and enjoyed the water and the breeze. 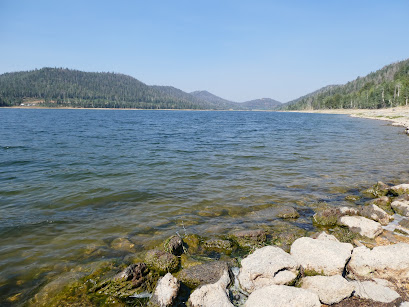 So I am home now mulling over those messages.  An additional one came to me a few days ago.  The meditation group that I had joined will be meeting on Sunday, sans moi, to work out a solution for the group.  This issue has been on my mind this week, and I finally decided to consult my Inner Child about it.  She was wagging her finger at me, and was making tisk tisk sounds.  She said, “Leave those people alone.”  I took that to mean that what they were doing was none of my business, and I should forget about it.  I did, and we are much happier now.

I often get questions from people on how to communicate with their Higher Selves.  This is done through signs, symbols and synchronicities, not through verbal conversation.  It is quite like dreamtime work.  That is why it pays to pay attention to the subtleties that life sends your way, because they can be messages from your HS.

On the other hand, you can have a verbal back and forth conversation with your Inner Child.  This aspect of yourself represents your very best inner friend, one who will steer you straight, and give good advice.  I have instructions on how to do this in my book, and also in one of the Rise Multiversity workshops.