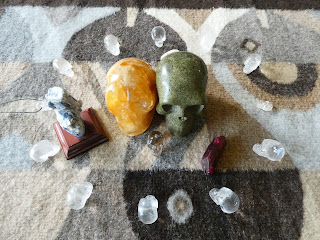 Yesterday, our local meditation group met at my house.  Since I had acquired some new crystal skulls the previous week, I decided to throw a skull party!  I already had skulls that were energized by Max and also Einstein the “Skull of Consciousness”.  My new skull Huaman Lipa and 10 pocket sized clear quartz skulls were energized through sacred ceremony with the Mayan skull Cana Ixim and the Tibetan skull Amar.  I also acquired 2 very small skulls that were energized by the Mitchell-Hedges skull in a similar manner.  If you are interested in the history of any of these five, they can be researched on the internet.

Above is the altar that I set up in my living room.   In the center of the circle are Mini Max (energized by Max), Huaman Lipa (energized by Amar and Cana Ixim), and Sun Dancer (energized by Einstein).  There are 10 small skulls also energized by Amar and Cana Ixim, in addition to the 2 very small ones that were energized by the Mitchell-Hedges skull, all arranged in a circle.  The fascinating thing about all crystal skulls is that they have the ability to share and transfer information and energy.  So by setting up the altar I this way, the energy from all 5 of the notorious skulls can be amplified and shared.

No one else in the group owns any skulls, so I asked them each to bring an item of crystal or semiprecious stone to be energized during a sacred ceremony and meditation journey.  You can see some of these items in the photo.  Of course, these items won’t transmit the sacred energy to items in the participant’s homes like the skulls would one to the next, but will serve as a talisman of that energy that they can use in meditation or just to tune into.

After we were set up, I gave an explanation of what the skulls were, and we proceeded to do the meditation.  I will give the short version.  I have to say that we all went pretty deep, and some of the information is already fading.  Since the participants were not used to getting into an altered state of consciousness, they remembered very little of the journey, and didn’t even hear my voice at certain times!

After grounding and expanding, I led the group to the shamanic land of the Stone People.  Here, we encountered a human body sized crystal skull on a round platform, with several concentric rings of smaller skulls around it.  This was the ruler of the Skull Kingdom.  I asked several questions out loud, and asked that everyone receive answers from the giant skull, but as I said, they went so deep that this was impossible for them.  Here is the information that I received.

The ruler of the Skull Kingdom’s job is to transmit energy and information to all of the skulls here on earth.  He has been doing this for eons, but he is just the middle man.  The origin of this energy and information is a star system extremely far away from earth.  My impression is that it might be the Pleiades star system.  The Skull Kingdom also resides in the space between 2 dimensions so as to be hidden from those who might want to interfere.  The information that is being sent to Earth and to all skulls that are here is the patterning for the original seeding of humans on earth, before all of the tinkering by other off planet races created the mess that we are in now.  Because of this tinkering, we as a human race haven’t been able to reach the elevated level of consciousness that is our birthright.  The star system that is beaming information to us via the crystal skulls is one of creators of not only we as a human race, but our beautiful planet, which was intended to be a Garden of Eden.  They are and have been connecting with us in this way with the hope that our situation can be reset with the original patterning.  This patterning is all about peace, harmony, equality and heightened levels of consciousness, which is how were intended to live.

Why do this through the crystal skulls?  The skulls represent consciousness.  An arrangement of skulls not only connects to each other and their keepers, but they form energy patterns, or grids.  They can also store or transmit energetic information.  I know that I received much more information yesterday, but it has slipped away from my conscious mind.  The last thing that I asked of the ruler of the Skull Kingdom was to send a beam of energy to connect to our altar, and thus to each one of us.  That was a blast!

I brought everyone back from the meditation, we chatted a while, and then they went home.  I plan on leaving the crystal skull altar up until our next gathering on Sunday.  The energy is so powerful, that it is even hard for me to be near it.
Posted by Carla Fox at 2:31 PM