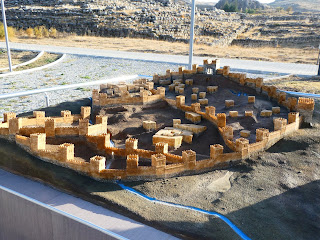 One of my favorite places on this trip was the ancient city of Hattusa.  It was the Hittite capital from 1800 BC until 1200 BC when the city and the Hittite empire were both destroyed.  It was built on top of a strategic site that had existed there since the 3rd millennium BC.  It is also a UNESCO World Heritage Site.

What we found when we got there was an extensive and large area of ruins mainly on a series of hills, with 360° views of the surrounding countryside.  Strategic indeed!  The city had been heavily fortified with ramparts and walls surrounding it. The above photo is a model of what the lower city and temple would have looked like.  Below is a section of the city wall that was reconstructed on top of its original foundation.  Quite impressive! 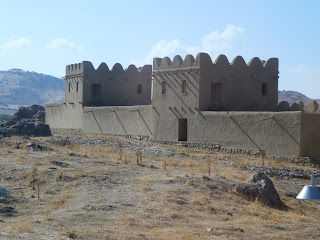 I wasn't sure if people are allowed to wander all over the place there.  Since our group was on a bus, and it was later in the day, we drove the main road and stopped at the most important places.  On the road around the site, I noticed many boulders and rocky alcoves that were carved with stairways and doorways that reminded me of Peru.

The road we were on went up to the highest point of the site and skirted along the inside of the huge stone fortification wall that remains standing.  Our first stop was at the Lion's Gate. 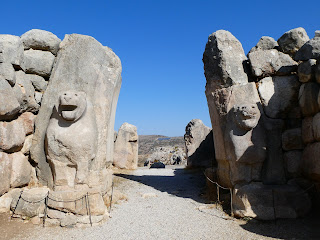 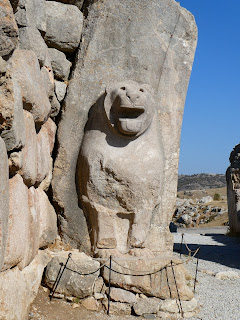 Polygonal walls next to the Lion's Gate. 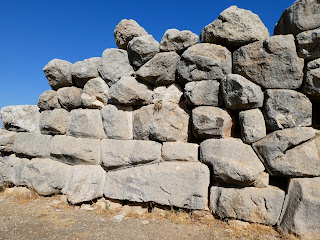 Then the Sphinx Gate. 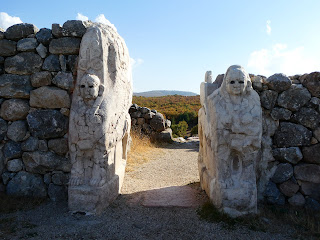 And a view of the ruins of the upper part of the ancient city. 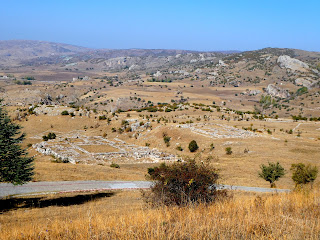 Then on to the King's Gate. 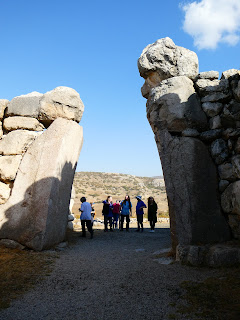 All of these gates served as check points for entrance to the city, and when intact, looked like the reconstruction below. 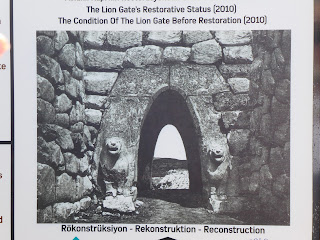 Then for the best part of all.  We drove back down the hillside to the lower city where all of the official buildings and the temple were located.  All of the stone here is limestone, and note the combination of finely carved and cut stones with the other eroded ones. 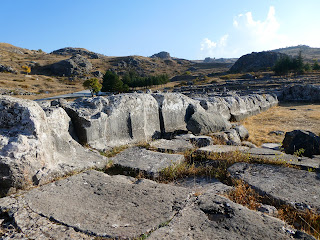 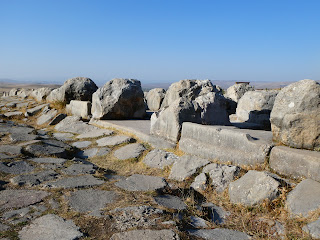 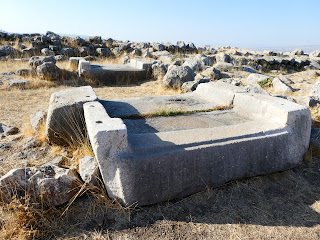 Now we have perhaps the most fascinating and enigmatic aspect of this whole site--the mysterious green stone of Hattusa. 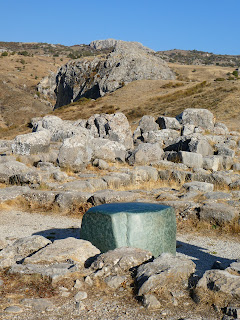 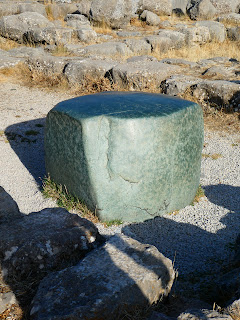 There is nothing like this in the whole area.  It is composed of green nephrite, which is related to jade.  It's top surface is polished to a mirror-like finish, no doubt from people touching it over hundreds of years.  No one knows where it came from or who put it there.

As readers of this blog know, I visit ancient sites like this to tap into the energy because I am very interested in the advanced skills that the ancients had, especially related to shaping and moving megalithic stones, and also their sacred sites.  Here are my impressions of the nephrite stone.  As soon as I put my hands on it, I went way out into the cosmos.  Straight up!  It was clear that it was used in ceremony, perhaps shamanic, to travel in that manner.  Of course, only the foundational stones that outlined this room remain, but it had the energy of a private sacred place, a holy of holies, an axis mundi.  The space was not for the general public, and the priests, elite, and shamans used the stone to travel and get information.  I asked why was it placed in that particular spot, and the answer I got was that there was already a vortex of energy there.  The axis mundi energy was coming straight up out of the ground, through the stone where it got amplified, and straight up into space.  I got quite a hit of energy here!

This last photo shows my crystal skull, "The Traveler", getting energized on the stone as the sun was starting to go down.  He's been everywhere with me, and will then transmit the energy that he has absorbed to the rest of my skulls when we get home. 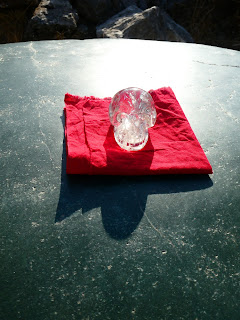