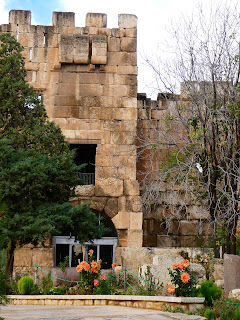 Now on to the huge and fabulous ruins of Baalbek, which is a UNESCO World Heritage Site, and is billed as having the largest and most impressive Roman archeological remains in the world.  It did not disappoint.  To get there, we drove from Beirut, across a mountain range, and down into the Beqaa Valley, Lebanon’s main agricultural area renowned for its wine production.  We went through a town that started as a Palestinian refugee camp and had turned into permanent housing, and also saw several Syrian refugee camps along the way.

Our first stop was at the quarry where the “Stone of the Pregnant Woman” is located.   I’ll write more about that in the next post.  While we were there, however, a fierce wind starting blowing, with dust, dirt and garbage blowing everywhere, followed by lots of low rumbling thunder, and then torrential rains.  After hanging out in the site’s gift shop, we went to lunch, and cut the day short a bit by checking into our hotel in Zahle. 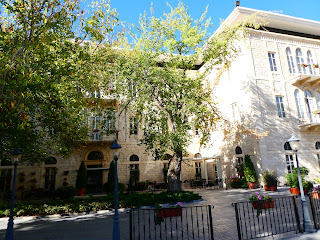 This is a lovely town on a mountain slope that has always been a refuge for wealthy Lebanese and foreigners to get out of the summer heat.  We were to spend 2 nights there.

Anyway, I do not know if it was the big lunch, travel fatigue setting in, the big weather change, or the preview of tomorrow’s energy at Baalbek, but I went right to bed in the middle of the afternoon after checking into the hotel.  After a lecture that Hugh Newman gave the group later in the afternoon, I took a walk onto town after nightfall to get some snacks and to get back into my body, only to have the power in the whole town go out because of the ongoing storm.  A little creepy, but the headlights from the passing cars helped light my way back to the hotel.  It was still raining at that point, too.

So on to Baalbek the next day.  Fabulous!  Not only is the total area of the site very large, but remains of the structures that are there are huge, too.   Most of the structures are made of limestone, but there are also columns of red granite that came from the Aswan quarry in Egypt and several other kinds of granite that we could not identify.   Here are some photos. 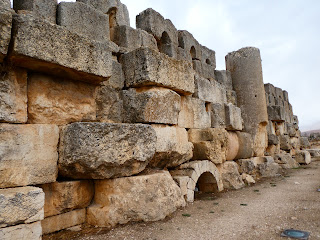 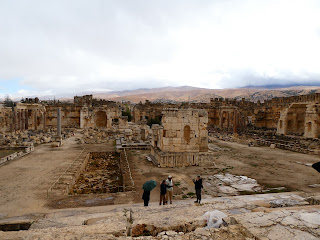 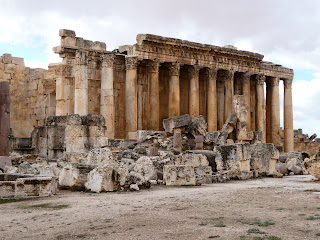 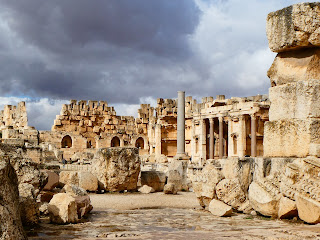 Here is the red granite from Egypt. 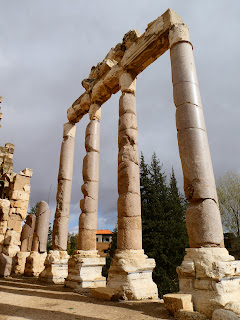 As I wandered around, mouth agape, I stopped to tune in energetically to a huge block of limestone. The first impression was the energy of “love”.  I then remembered that I got that same energy at Alacahöyük at the start of our trip.  What does this mean? The energy was elevated, joyous, sparkly, and gave me a sense of happiness.  Is this the vibration that was used to levitate the super heavy stones?  I also received a message that said that the large multi ton stones could be tossed around like a child’s wooden blocks.  This is not the first time that I have felt that giants were involved.  Here are more photos of this amazing site. 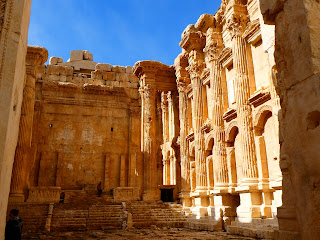 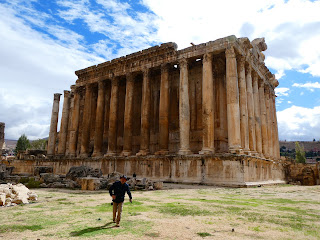 Here, we were looking down through a gap in the upper wall to view the megalithic blocks that we would visit later in the afternoon.  They look small here, but they were the size of railroad cars. 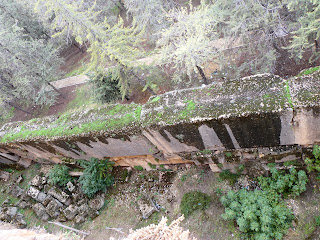 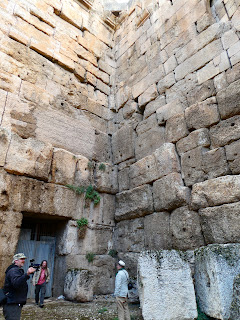 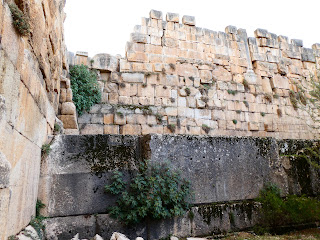 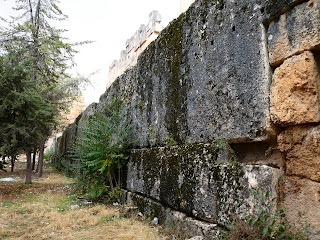 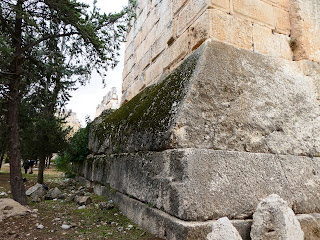 Here is the often noted Trilithon, the 3 800 ton stones that are actually on top of several 400 ton stones. The enigma is that normally, heavier and larger stones are on the bottom, yet it is reversed in this location.  The Trilithon stones are the 3 paler stones at the center of the photos below.  It was too large to get into one shot. 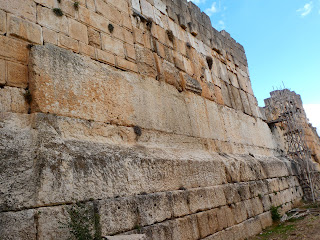 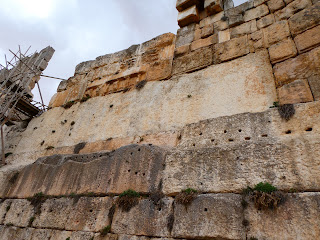 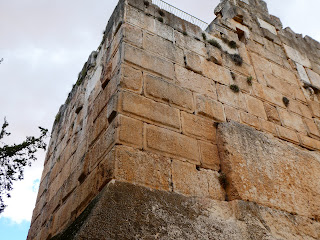 I took some time to tune into the large railroad car sized stones that were lined up in one of the photos above.  What I got was that the large multi ton stones that we were looking at were indeed much older than the rest of the site. They were there first before anything else was built.  They were moved through levitation and vibrational softening.  The interesting bit here was that when using this method, there was no difference in the moving of a heavy and bulky stone versus a smaller and lighter stone.  It was all the same since gravity and weight did not apply!

By the time we left Baalbek, the weather was starting to clear up. 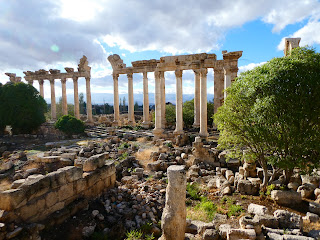 We went on to visit several quarries, which I will write about in the next post.