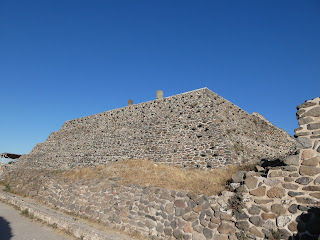 After spending several hours at Teotihuacan, it was time to move on to our next and last destination of the day, which was the Toltec site of Tula, located northwest of Mexico City.  Unfortunately, one of our group members had gotten lost at Teotihuacan, and it took over an hour to track her down and get her on the bus.  We had over an hour to drive, and there were concerns that Tula would be closed by the time we got there.  Fortunately, our Mexican guide pulled some strings and got them to stay open late for us.  By the time we got there, we were the only tourists on the property, and it was nearing sundown.  It was nice to have the place to ourselves!

Tula was a Toltec stronghold that fell around 1150 AD.  The main feature of this site is the Pyramid of Quetzalcoatl with 4 huge Toltec warrior statues and several equally large square carved pillars placed prominently on its flat top.  Surrounding this pyramid were the remains of many ceremonial buildings. 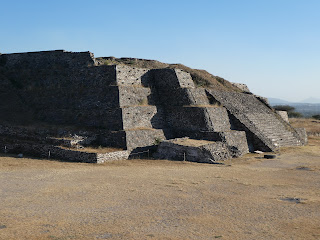 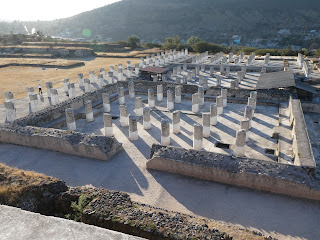 The pyramid sits very high up and can be seen from a great distance all around.  There was also a lot of water surrounding it in its day.

When we got up to the top, it was easy to see why this place was selected to express and display the power of the ruling elite here.  Luckily for us, since we were the last tourists of the day, the guard stayed down below, probably not wanting to make the climb up to the top one last time.  The statues were roped off, but some of us decided to go beyond the ropes to get up closer since the guard could not see what we were doing! 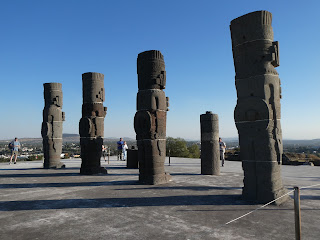 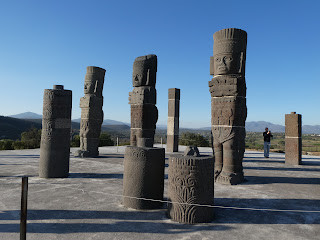 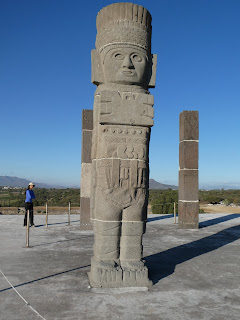 I always like to track by putting my hands on the stones at the area in question, so I went to the back side of one of the giant Toltec warriors and did just that.  One of my roommates, Maxine, did that, too.  Since these statues were so very tall, we found ourselves with our hands on each side of its rear end.  A very laughable situation!

Immediately, a strong testosterone driven male energy came though.  This site was all about who the ruler was, who was in charge, who owned everything, and who had all of the power.  It was almost overpowering and very aggressive, too.   The phrase “absolute power rules absolutely” came to mind.

This was reinforced on the way back to the bus when we passed friezes featuring skulls and then jaguars, all with teeth barred. 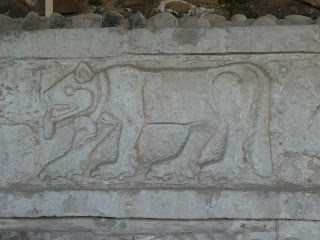 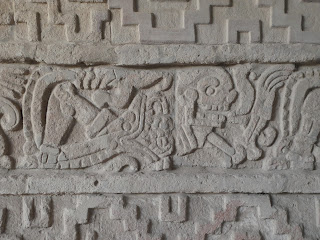 What magic, though, to be in a location like this as the sun was going down at the end of the day with no one else around. 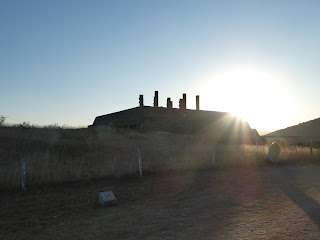