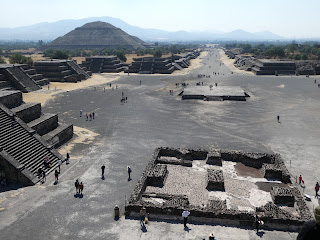 In spite of the fact that it was pretty crowded with tourists when we were there, there was plenty of room for everyone to spread out.  Our first stop was at the Pyramid of the Feathered Serpent, which is located in a courtyard big enough to accommodate 100,000 people.  The original ancient temple, once covered in feathered serpent motifs, has a more modern platform built in front of it perhaps to hide it from public view.   Also keep in mind that all of the pyramids that we visited on this trip were built in layers, with the smallest, oldest and innermost one holding the sacred energy and most likely built on a high energy location or energy vortex.  Burials and offerings were found associated with each additional layer.  These pyramids all have flat tops, mostly with some kind of structure built on the top, and were constructed with local stone.  In the case of Teotihuacan, this was basalt or volcanic rock. 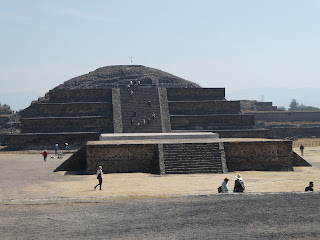 We walked around to the older pyramid, which was fenced off, so we couldn’t climb it.  It was decorated with many feathered serpent motifs. 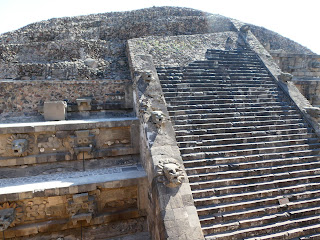 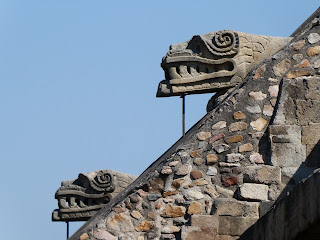 We then climbed up onto the platform in front to get a good look at the original pyramid behind it.  From that vantage point, I settled in, calmed my mind and felt into the energy.  It was very powerful and dynamic and quite a good feeling.   This was a place where one could easily recharge their own energy. The whole pyramid was broadcasting!  The origin of the energy was at ground level in the center.  If you research this pyramid, you can read about all of the strange things that were found there during excavation.  I am assuming that in addition to there being a natural vortex here, that sacred ceremonies were performed in that location before the actual building was constructed.

We then took the bus further down to enter the “Avenue of the Dead” to experience the other 2 pyramids.  I could almost put myself in that location during one of the big ceremonies.  Thousands of people, all dressed in brightly colored clothing, in addition to the buildings covered with their original stucco and painted in bright colors.   It was a bit overwhelming!

On to the Pyramid of the Moon.  It was built on top of a structure that is older than the pyramid of the Sun!  Visitors are only allowed to climb half way up this temple dedicated to the Goddess, and from that landing, the whole “Avenue of the Dead” can be seen. (see the first photo)  Energetically, the vortex of this pyramid originated in the center of the structure, halfway from the bottom to the top.  There was a strong steam of energy shooting up into space from that point, almost like a beacon.  Positive energy was also radiating out from the pyramid in all directions.  A very nice and mellow feeling. 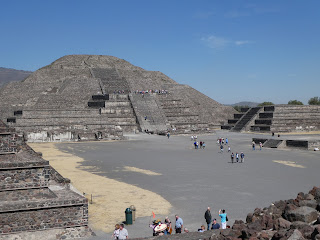 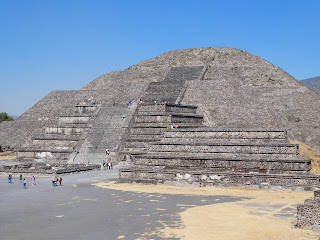 After that, we wandered through some of the structures off to the side that contained some very nice murals. 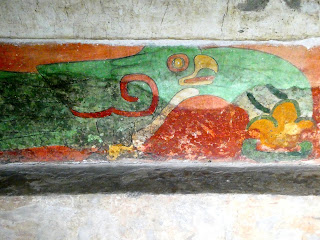 The last stop was the Pyramid of the Sun. 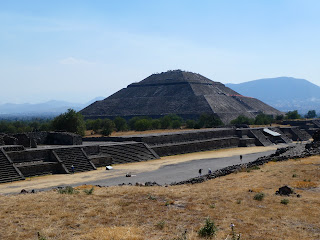 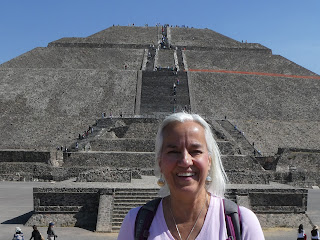 As time was growing short, I was only able to climb up partway to the top.  Here was a very different type of energy.  As I have already written, I like to pause, relax, tune in and receive.  The first energy I got was one of death.  I asked “whose death?”  Turns out, it was not the energy of those who may have been sacrificed there, but instead, those who died building the pyramid.  It was almost as if the structure was cursed with all of those accidental deaths. 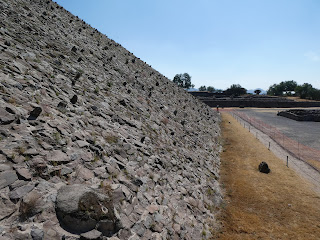 Not pleasant at all, and from where I was standing, I could not detect any kind of vortex.  So, then back to the bus and our trip to Tula before the end of the day.