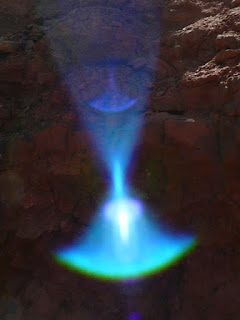 This post is a continuation of the previous one entitled “Cosmic Pathways”.  If you have not yet read that post, please do so before continuing.  At the end of that post I wrote about how just watching a program on innovative uses for the ancient Japanese art of origami triggered my memories of being a space ship pilot, which I will write about here.  It always amazes me how we can be doing an activity in 3D while some other part of our consciousness is taking another journey altogether!

Knowing that I have an aspect that knows how to pilot a space ship is not news to me, but I hadn’t thought about it for a long time until I watched the program on origami.  Here are the memories that got triggered.  First of all, I have no idea about the location of what I am describing.  It is, however, most likely somewhere in our Milky Way Galaxy.  The type of ship that I pilot is an organic living structure.  I direct it by putting my hands on the “dash board" and into impressions that exactly fit them.  I merge my consciousness with the ship and away we go.

Who am I?  That is a good question!  My sense is that I am humanoid, but not entirely human like we are on earth.  When I look down at my hands that are pressed into the dash board, I can see that the ends of my long fingers are spatulate, almost like those on some amphibians.  If you recall seeing some of the various Star Trek TV episodes, there is always a mix of humanoid races present.  I sense that my aspect is also in that kind of situation.

My particular race was most likely bred for the specific purpose of merging with and piloting a ship.  Each pilot has his own ship, and they are not interchangeable from pilot to pilot.  What was to happen to this relationship if a ship gets destroyed or a pilot dies, I do not know.

I then connected into exactly how the pilot knows where to go in outer space.  Instantly upon asking myself that question, I could feel and see a glowing nugget of energy deep in the center of my head.  Perhaps this is a special gland?  This special organ has the ability to connect to a specified pathway of travel, which the pilot then transmits to the organic ship.

This is where the origami comes in.  An origami shape consists of mountain folds that stick up, and valley folds that point downwards.  It is the combination of these that creates the shape of the final 3D figure.  The special gland in the pilots head can connect to one end of the mountain fold and use it like a cosmic highway.  It’s like gliding on the crest of a sand dune.  As I am writing this I am reminded of my trip to the Coral Pink Sand Dunes State Park in Utah last fall, and the fascination I had with the crests on the tops of the dunes! 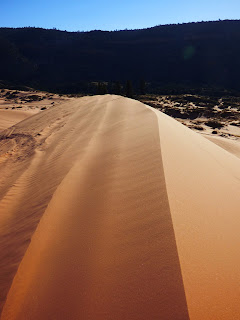 The pilot can also fold time and space via the origami model to get to a location much faster.  Picture a piece of paper with a straight line drawn on it with point A at one end of the line and point B at the other.  If one folds the paper in half using a valley fold going across the middle of the line and perpendicular to it, point A and point B meet directly above that fold.  Voila!  Travel between the 2 points is instantaneous.  I am sure that there is more to this story that may unfold at a later date.  I am also planning on doing my next Rise Multiversity workshop on discovering our non-earth aspects.

Below is a photo of a datura plant that I took near Big Water Utah last fall.  Note the 5 sections of the blossom with the valley folds creating the divisions.  There are small mountain folds on the center of the edge of each of the 5 segments.  There are also 5 tendrils coming off of the divisions of the segments.  This is origami reflected in the natural kingdom.  I am also reminded of the streams of energy that come out from each galaxy origami style that I mentioned in the last post. 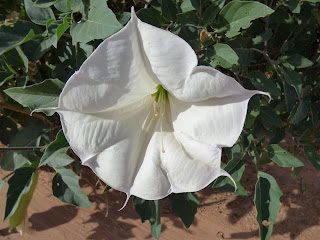 One last photo I would like to show is a plant named “sky pilot”!  It is a precious flower that can be found in late spring and early summer in the alpine zone above the tree line.  Some years there are few to be found, and other years there are many, all depending on high elevation moisture and weather conditions.  I am always delighted to find even a few!  They will always remind me of my sky pilot aspect. 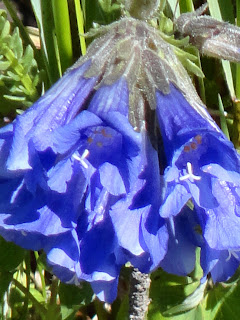