Island of the Sun 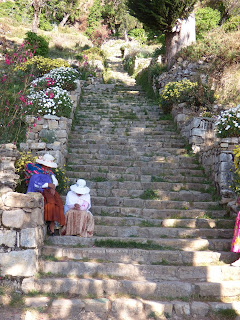 Our group was so very lucky to be able to spend 2 nights and almost 3 days on the Island of the Sun.  Lake Titicaca is the highest navigable lake in the world at around 12,500’ in elevation, and our lodge at the top of the island was at least at 13,000’ or even a bit higher.  The views were fabulous, and the people, flora and fauna there inspired feelings of tranquility and serenity.  A true oasis!  Hiking up and down at that elevation was a challenge for some, especially since we were only a few days into the trip from elevations much lower in the states.  I had been there once before but only on a day trip, so I relished the opportunity to stay longer. 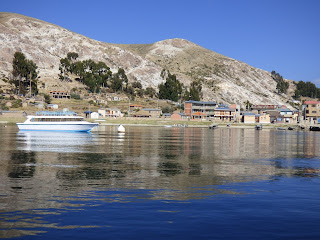 We hiked down from our lodge to the dock where the boat took us to another harbor in a town further north on the island.  Our destination was the Sun Temple complex, which was reached via a long upwards sloping trail from the harbor.  All the way over on the boat and on the trail, I invoked the strong and pure masculine energy of this sacred island, and the healing of my inner male energy.  As is common to most women on the planet nowadays, our inner male energy is quite weak and distorted, and we have very few strong male role models to look to for positive imprinting.  I could feel a shift happening within me as I hiked up to the site.  It was a most wonderful feeling!   This is how a strong intent can create a change in the presence of a high energy area like this lake and this island. 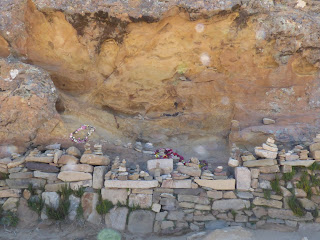 The Sun Temple site consisted of a plaza with the Sacred Rock (above) on one side facing the lake, a walled-in area where the actual temple formerly stood next to that, and a large stone “table” propped up by rocks across from the Sacred Rock.  Further down the path were the ruins of a building complex called the Chinkana, which is Quechua for labyrinth.  It was supposedly a place for the Inca king and his warriors to come for ceremony.  The whole place just oozed with male energy! 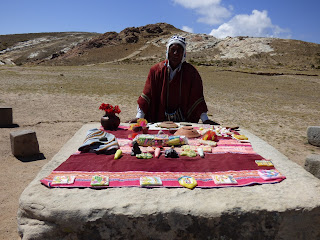 As we entered the site, we had a chance to look around.  An arrangement had been made for a shaman of the local Aymara people to do a special ceremony for us, and he was waiting at the stone table with his shaman’s mesa all laid out.  I just had time to leave an offering stone at the Sacred Rock, and to take only one photo.  Wish I had taken more!  We then went on to check out the Chinkana before going back to the shaman for our ceremony. 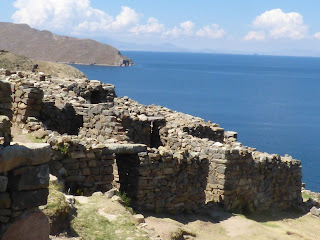 This whole area was highly energetic, and the Chinkana felt like the focal point for it all.  Here there were the remains of buildings, and a small plaza with a small stone bench propped up with stones.  Above this was a wall with a series of 7 life sized niches all facing the lake.  Julie detected a very powerful ley line coming into this spot from across the lake on the Peru side.  Was this one of the dragon lines that crossed Lake Titicaca?  There was also a very powerful vortex coming up out of the ground here. 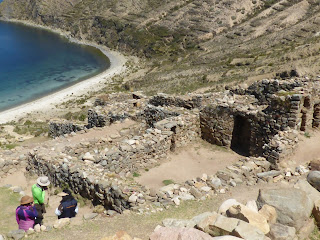 We went back for our ceremony with the shaman.  What a sweet man!  He proceeded to create a fairly elaborate despacho for us.  This is a medicine bundle that is designed to “dispatch or ship” prayers to the Earth Mother, or Pachamama, and the Apus, or sacred mountains.  It also includes prayers for the healing of the group attending.  I have done many of these in my shamanic work, and was able to follow along with the process fairly well.  It was a very sincere, gentle and heartfelt offering to our group, and I was truly moved by the whole ceremony.  When the despacho was finished, it was burned on the spot to facilitate the release of the healing energy. 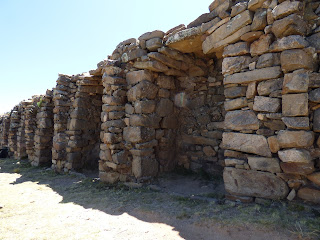 When that was finished we had time to wander, and I went right back to the Chinkana.  With luck, there were no people around, so I laid out 2 sacred stones and my crystal skull on the stone bench in the plaza.  As I sat and tuned in, it felt like I was encased in not only the vortex there but the ley line coming into the site.  The surroundings went bright and clear, and my skull started to pulse and even generate its own vortex on the spot.  After a short while, people started to come around, so I packed up my sacred items and then went up to the level above to stand in one of the life sized niches. 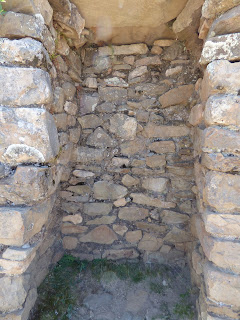 The story that you hear is that gold covered statues were put in the niches that are very common throughout Bolivia and Peru, but in this case, I felt that perhaps priests also may have stood there.  Their job was to absorb the energy coming in via the ley line and not only anchor it into the ground but also radiate it out to the community at that location.  So I did just that, getting into an altered state in the process. 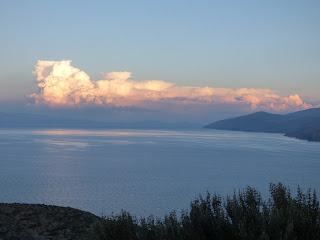 Our group soon gathered and made its way back down the trail to the small town, the dock and our boat that would take us to lunch and our afternoon destination on another part of the island.  Then a long hike back to the lodge for dinner.  I firmly felt that my inner male energy had experienced a big shift, bringing it into a better alignment with its true healed nature and with my female energy.