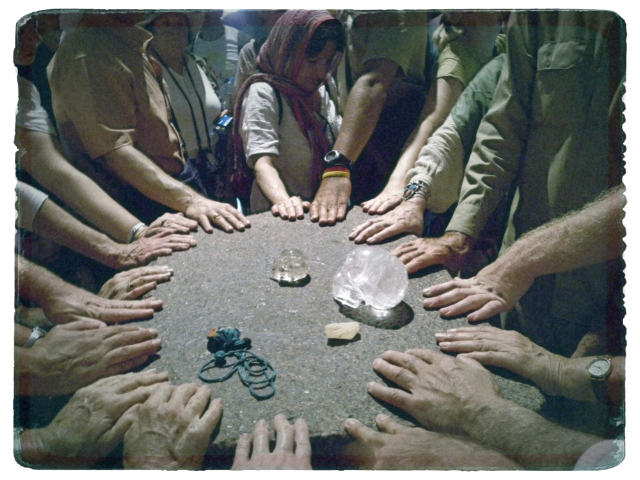 Our launching group got together today and the information that came in did not disappoint.  This post really deserves its own title, but right now, I can’t think of one!  We chose this date because it is in between this last week’s lunar eclipse on the 15th and the upcoming solar eclipse on April 29th.  A very high energy time indeed.  The planet has also recently experienced several earthquakes in the 7.0 range and higher and we are experiencing the latest round of solar flare bombardment this weekend.

Right before the first participant launched, I started feeling a familiar deep and low vibration going through my body.  On the occasion that I have felt this it usually means that there is some sort of large UFO in the area above me, cloaked of course.  Actually, after the whole launch was over, one of the participants said that she thought that we were being watched today.
When it came for my turn to be launched, I used the deep low vibration as the focus of my intent.  I wanted to know what its origin was.  To my surprise, I was shown a cut away version of planet earth with all of the layers visible.  Here is the information that I perceived.  We know scientifically that the inner and outer core of the earth’s center rotate in different directions, and that the movement of molten metal in the outer core generates the earth’s magnetic field.  What I got was that there has been a shift in the speed of rotation of these 2 layers and that the difference in speeds between them has gotten bigger.  In fact, even though it cannot be scientifically proven, it felt to me that all of the other layers of the earth have started rotating in opposing directions, too, with a much greater difference between their vibrational states.

This increasing difference of speed of rotation between the layers of the planet will affect the magnetic field and also gravity.  The change will be seen and felt from the micro levels of the atom to the planet as a whole and all life that she hosts.  In other words, matter is starting to be affected.  That makes sense to me as the end product of our dropping down into density is the 3D world of physicality, and matter would be the first to start the shift back to a higher and lighter dimension.  Several years ago when I asked what the first symptoms of “ascension” would be, I got that my energy bodies would  change and differentiate vibrationally from each other, and then they would start to separate.  Could this be happening to the earth as well?

I then hovered above the earth’s surface and gradually backed up to take a broader view of what was happening.  There were streams of energy connecting the heart of our planet to all other planets and moons in this solar system, in addition to our sun.  I also suspect that these connections were being made to the consciousness of stars, planets and moons in other parts of the Milky Way Galaxy.  All roads lead to Rome, with us being Rome!  We truly are at the very center and core of the upcoming changes for all sentient life in our galaxy.

So, be alert and aware to the changes in matter, whether it is keys that no longer work because of a slight change in their shape, fruits and vegetables that suddenly taste very different, objects disappearing before your eyes, animals (and people) acting strangely, or even being able to pass your hand right through a wall because the atoms of that wall have spread apart to leave more energetic space between them.  As a matter of fact, I had an extra front door key made just yesterday.  It works the lock in the doorknob just fine, but will not turn the deadbolt at all.  Shades of things to come?

Dr. Richard Alan Miller has recently been on Coast to Coast AM and John B. Wells' new radio show Caravan to Midnight.  He is a real hoot, with tons of very interesting information.  If I get the story correct, at one time he was helping to develop a criteria for choosing soldiers who would have the lowest mortality rate in dangerous and high pressure combat situations.  He found that the ones who did the best went by their gut instinct and not their rational brains.  IQ did not win out here.  This is a skill that we all have to develop and trust in the crazy times ahead, especially if some very strange things start happening. Go with your guts!  (By the way, I never did bother to verify the presence of a space craft over the house.  I do believe however that one was there during our launch today.)