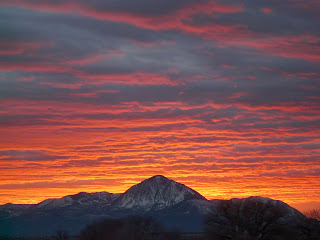 Last night I had a group of friends over to the house for a shamanic fire ceremony honoring the Winter Solstice. If I am in town for the solstices and equinoxes I always do ceremony for those who would like to participate.  Winter Solstice is my very favorite as, no matter what the winter evening weather shapes up to be, it is pure magic being outside in the snow or under the stars.  Last night was no exception.

Many native cultures around the world honor this day with ceremony for the time of year when the days start to lengthen and the planning for the coming year’s planting of crops begins.  I actually had the honor of participating in Winter Solstice ceremonies during two trips to Peru in June of 2001 and 2007, and then again in Montana and Colorado in December later in those same years.  Now that was a treat!  This celebration marks the start of a new solar year, and is a very natural and organic annual milestone, unlike the other holidays that are following in the next 10 days.

Last night, in addition to the spirit arrows that we put into the fire, I asked each participant to create a special medicine bundle or “package” to also put into the fire.  The spirit arrow symbolizes the person’s release and positive outcome for an issue that has been coming up for them, so the theme is usually very present, practical and personal.  The medicine bundle is made from all white ingredients, including a small crystal.  For last night’s ceremony in particular, it represented (mainly but not inclusive of) their spiritual evolution.  When these bundles went into the fire, the effect was very noticeable as the vibration of our surroundings went up with the release of all of those high positive intents into the flames.

Of course, I was not privy to the intents of the others, but it was my distinct impression that we were all getting a DNA upgrade to prepare us for the coming year.  By all accounts from what I have heard here and there, it will be a doozy, both on the inner planes of consciousness, and the outer planes of physicality.  We had supportive spirit helpers in attendance as well as our connection to our Higher Selves.  Our Core Essences were fully expanded during the ceremony, and we were able to absorb all of the higher vibrations that we were immersed in.  The whole experience was quite mellow.

For those of you who were not able to participate in a ceremony ushering in this next year, you do have a window of several days around the solstice to set your intent for 2014, so it is not too late.  It is time to step into your full sovereignty as a human being and call in your full re-membering of who you are and what it is that you will be called to do in the future here on this planet.  Call forth your full awakening.   Call forth your courage.  Call back your personal power from wherever or whomever you have given it to.  You will need it.  Embrace the magnificent awakened being that you all are on some level, and bring this beingness into your daily life.

Pay close attention to your dreams, as we are tapping into the dreamtime realms more and more now.  There may be clues there that will guide you and possibly give you a heads up on upcoming events.  I am not much of a dream rememberer, but did have a few good ones around Thanksgiving that, in retrospect, were somewhat precognitive.  All other dreams lately have been more lucid than usual, too.  It would probably be a good idea to write them down.

Enough of the pep talk, as you probably get the idea by now.  I suspect that what I have written here today will be more of a theme as the year goes along, so you will hear more about it.  Happy Winter Solstice to everyone, and here’s wishing all of you a momentous start to the upcoming solar year.