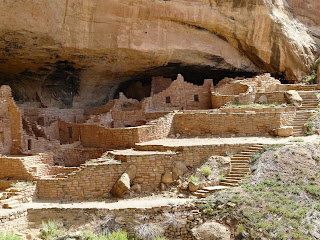 My sister Julie and her friend Steve left on Sunday morning after visiting me here in Cortez for 4 days.  Everything went fairly smoothly and a good time was had by all.  We spent a day at Mesa Verde National Park exploring the cliff dwellings and got caught in a very strong lightening storm.  This prompted the ranger at the site where we were to allow us to go into the restricted area at the back of the ruin so that everyone could take shelter.  We also had a successful mushroom hunting excursion and picked enough of them to have for dinner that evening.  There was a power outage on Friday night, and we were all amazed at the view of the Milky Way and the brilliant night sky.  My guests live in Denver and never get to see the stars without the usual city light pollution dimming the view.  We were also in the midst of the annual hummingbird migration, so my feeders were mobbed at all times and it was fun to watch the feeding frenzy.

There were of course a few problematic moments when my sister’s zingers were aimed my way, but none of them triggered any kind of reaction within me.  My equanimity held as if she had never said anything to me at all.  Generally, I am the target of her ill will at some point during any visit.  It did help to have her ex-husband Steve here, as a good deal of her attention was focused on making sure that his needs and wants were taken care of, but that is another story altogether!

As I see it, the main reason for my being able to hold my energetic balance and not react to the zingers is twofold.  First, I did a Quantum Sphere Healing session on myself before the visit to focus on clearing the person to person karma that I shared with Julie.  Secondly, because I no longer have any chakras, which serve as intake vortices for heavy energy, the typical zingers had no entry point into my energy field.  Yeah!!!!!

Instead of wasting time reacting as I normally did during previous visits, I was able to do more observation of what was driving off balanced states and thus problematic behaviors in both of them.  This ranged from the morning coffee buzz wearing off, to low energy levels due to not taking care of their caloric needs while hiking, to carbohydrate or alcohol cravings that would drive cranky behavior.  No equanimity there!

On top of all of that, my cat freaked out and spent most of their visit hiding under my bed.  I guess she knew what was up!  So now the cat is back to her normal self, her equanimity restored, and I have caught up with the jobs around here before getting back to my client schedule and my routine.  At least I now know that future visits with my sister can be approached without trepidation on my part.  Progress at last.