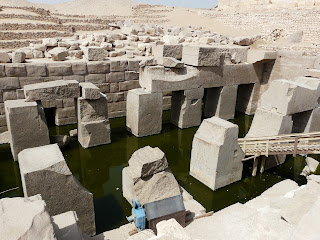 One of the most fascinating and enigmatic sites in Egypt is the Osirion, which is located behind the Abydos Temple.  Abydos is about a 3 hour drive from Luxor, and is an amazing place all by itself.  It was built by Seti I in front of the already existing Osirion, thought to be the burial place of the god Osiris.  Our group visited there on December 9, 2012.

To get to the Osirion, one must go through the Abydos Temple and exit out the back. It was a subterranean structure whose ceiling was below ground level and was presumed to be covered by a hill of dirt.  It has been totally excavated, and so now one stands on a ledge above it and looks down into the central chamber. The inside perimeter is made of large finely fitted sandstone blocks with 6 built in niches on each of the north and south walls.  There are 10 red granite pillars in the center that once held up massive red granite roof beams, parts of which are still evident.  The pillars in the center of the structure weigh about 100 tons each, and are expertly carved and polished, perhaps by the levitation and softening process that I have already written about.  Also in the center of the structure is a raised area that has 2 stairways going down to a chamber that is below the floor level.

There are areas of wall art at the east and west ends, and a number of Flower of Life figures on 2 of the pillars, but the rest is devoid of decoration.  For me, this fits my idea of the very ancient structures that were built 12,000 years ago.  It looks a lot like the Valley Temple at Giza.  The decoration could have been added by Seti I when he excavated and appropriated the Osirion.

I have been there 5 times now, and the floor has always been flooded.  This is an ongoing problem with many of the below ground sites in Egypt.  There is a wooden stairway that leads down to the floor, but it is blocked off at the top.  Of course, with a bit of bribery, our group took turns going to the bottom of the stairway, but going further into the water was not allowed.  One is allowed however to sit up above in several places to tune in and meditate.

Over the length of time that I have visited the Osirion, I have done some tracking of the purpose for this enigmatic structure. Here are some possibilities.  In ancient times, it may have been a time travel or bilocation device, back and forth to Peru and Bolivia or other ancient sites around the world where there are structures of the same construction.  What about an ascension chamber?  I could sense a process where highly evolved people would sit in the 12 niches around the perimeter in deep meditation while the person who was ascending or time traveling rested in the chamber beneath the floor in the center until the time was right.  Our tour director Julie thinks it was a stargate that became inactive, possibly after the last cataclysm, but is now in the process of becoming active again.  I entirely agree.

When my turn came to walk down the wooden stairway, I took the opportunity to reach out and put my hand on one of the red granite pillars.  Instantly, I felt my surroundings dissolve and go to pure light.  That had never happened before, so clearly there has been a huge shift in the energy of the place.  Was the portal or stargate being reactivated?  I took my hand off and tried again.  Same result.  It also felt like a space ship that was being fired up for lift off.  Since our time on the stairway was limited, I then went up to the top and sat in meditation.

When our group first got there, we went immediately back to the Osirion to be able to have it all to ourselves.  After our visit, we then proceeded to walk around Abydos to absorb the refined energy of that temple.  Before our final departure, I came back to the Osirion for a last bit of meditation and tuning in.  This time, I didn’t even have to put my hand on the granite pillar.  Just sitting there was enough to get me into that space of dissolving light.